A reading of my new one-woman show VIRTUE OF SELFISHNESS - a comedic and satirical look at women in the #metoo/neo-liberal/Alt-Right moment.

Come see wRETCH - the final concert my first non-solo show in 15 years! And it's a musical!

Pan is a queer punk-rock diva, and this is her last concert! Or is it?  Her band can’t tell . . . Will the audience? While they try to figure it out, they play their set of riot grrrl-style proclamations on drugs, lesbianism, eating disorders, and taking up space. Get ready to smash the patriarchy, and maybe a guitar or two, at this bombastic all-woman rock extravaganza. July 12, 14, 15 @ 9pm The Wild Project NYC / Fresh Fruit Festival Tickets only $18 - Get 'em now: https://web.ovationtix.com/trs/cal/527 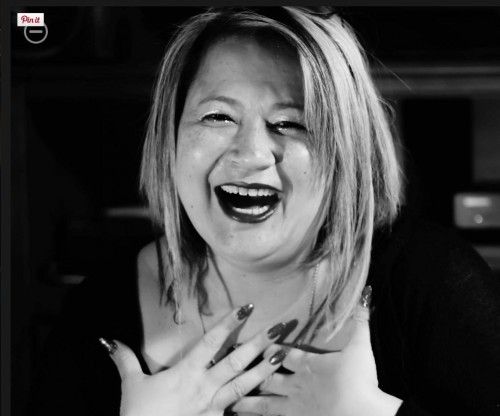 Short bio. Pandora Scooter is an award-winning, national touring artist, spoken word performer and playwright.  Her two tours, OUTwordlyFabulous and I AM ENOUGH were focused on helping LGBTQ+ teens throughout the country.  She has recorded three CDs, hosted a queer open mic called Out of the Box for 16 years and has written a text book on script analysis, which she has taught at major universities and acting schools in the tri-state area.  Currently, she works at NYU, Terry Knickerbocker Studio and Girl Be Heard, a social justice theatre program for underserved girls in NYC.

Most recently, Pandora was awarded Best Musical with Rachel Felstein (composer) for her punk rock, all-female, feminist musical wRETCH, which featured at the Fresh Fruit Festival in 2017.  In early 2018, she was invited by Hypatia-in-the-Woods, a women’s residency program, for an artist-in-residence position during the Summer 2018.  The project she wrote there is a new solo show called SELFISH, which explodes the idea that woman should be much more selfish.  The show applies ideas from Ayn Rand’s essay the Virtue of Selfishness and is set in a Women’s Stand-Up Comedy Competition.

Pandora has made a life-long habit out of charting her own path through life.  Never one to take no for an answer, little nine-year old Pandora got permission from her teacher to perform her book reports for the class.  Years later when a high school internship program told her she wouldn’t be able to get into Arena Stage,  Pandora persevered and became the first high school intern to work at the prestigious regional theatre.

After cutting her teeth at Arena Stage under the mentorship of theatre greats like Garland Wright, Jim Nicola, Guy Bergquist, Zelda Fichandler, Martha Knight and Benita Hofstetter, Pandora went on to pursue a BFA in Acting at SUNY Purchase, a top 10 ranked acting conservatory in the nation.  There she studied with such luminaries as Eulalie Noble, Israel Hicks, Chuck Fox, Dean Irby, Joan Potter and Barbara Knowles.  After three semesters, Pandora decided she wasn’t ready to pursue acting as a career and left SUNY to attend Rutgers University where she majored in Theatre (focus Directing) and minored in Asian History.

While at Rutgers, Pandora met the legendary director Hal Scott, who agreed to mentor her on her Henry Rutgers Senior Thesis, Bertolt Brecht’s The Life of Galileo.  This relationship would prove to make a profound difference in Pandora’s future.  One year after Pandora graduated, Hal hired her to direct for Mason Gross School of the Arts’ graduate theater department.  Three productions later, the department heads decided it would be better to invite Pandora to get her MFA in Directing there, exempting her from the first year’s coursework.  Pandora accepted the invitation with gratitude.

While at MGSA, Pandora received a Levin Scholarship and was awarded four TA positions.  She directed more than fifteen productions in two years including two thesis shows, Will (an original play about Shakespeare by fellow MFA student Robb Badlam) and Tom Kempinski’’s Duet for One, a story inspired by the fall of Jacqueline Dupre.  Upon graduating from MGSA, Pandora was honored with the John I. Bettenbender Outstanding Gradate Performance award.

Immediately upon graduating, Pandora was hired by David Saint to be Literary Associate at George Street Playhouse.  There she served as dramaturg on several shows, including Garden of the Forking Paths by Anne Meara and Jolson Sings Again, by Arthur Laurents.  Pandora also had to incredible opportunity to direct a staged reading of renowned playwright Velina Hasu-Houston’s new play Waiting for Tadashi.  The reading was so successful that David Saint decided to put it on the mainstage the following season.

It was while Pandora was at George Street Playhosue that she was invited by Maggie Flanigan to co-teach a new class for her students at Esper Studio called The Actor/Director Dynamic.  This continued what had been a very fruitful relationship between Pandora and Maggie, which blossommed when Maggie opened her own acting studio in 2000 and invited Pandora to be one of the founding faculty members.  While Pandora continued to teach Actor/Director Dynamic, she also taught Basic Theatre Texts (a class she had taught at Rutgers, Rider and Drew Universities) and Theatre History.  But her claim to fame at the studio was her original script analysis class, based on a methodology she had been devising since studying with Joan Potter in 1990.

The year 2000 was a momentous one for Pandora for personal reasons.  After nearly a decade and a half, she decided to come out of the closet.  This decision impacted those around her as well as her career.  She decided that it was time to return to performing, but this time as a spoken word poet.  She gave up directing and launched full on into her new performance career in December of 2001.  Never one for half-steps, Pandora was soon invited to feature at venues across the tri-state area including the Nuyorican Poets Cafe and the Bowery Poetry Club.  By 2003, she was performing at the New Jersey Performing Arts Center, where she was offered an annual series called Hip Hop: Out, Loud & Proud - a spoken word and hip hop concert for queer performers.  Also in 2003, Pandora wrote her first solo show, FEAR JUNKIE, while in residence at New York Theatre Workshop and was given a slot to develop it as part of their first annual Laron Lab.  From 2003 to the current year, Pandora has written and performed a dozen solo shows, two of which went on to major regional and national tours.  In addition, she has recorded and produced three full-length CDs, hosted a podcast (called QueerSpeak) and continued teaching.

In 2002, Pandora co-founded and co-hosted a performance open-mic called OUT OF THE BOX at the Pride Center of New Jersey.  This open mic is welcoming to queer and straight folks and everyone in-between and has been running ever since.  For 16 years, OUT OF THE BOX has provided poets, musicians, singers, drag queens, drag kings, dramatic actors and storytellers a supportive and enthusiastic audience in front of whom to perform their talents.  In 2014, Pandora started WAMP, the women’s art and music performance series, which has featured local and national celebrities such as ViRAGO, Julia Scotti, and Joann Filan.

In 2011, Pandora went on her first regional tour to the South, SE and North East Corridor with her show OUTwordlyFabulous, which she premiered at Crossroads Theatre under the direction of business partner and artistic collaborator Cedric Hill.  Her relationship with Cedric, which began in 2005, has proven to be greatly influential on her career throughout the years.  And in 2015, he directed the national tour of her critically acclaimed solo show I AM ENOUGH, which focused on stopping LGBTQ+ teen suicide.  Embarking on a 60-day, 24-city tour, I AM ENOUGH reached hundreds of youth across the country.

2017 proved to be another watershed year.  After 14 years of writing solo shows, Pandora branched out, writing an all-female punk rock musical called wRETCH, inspired by her fiance’s great appreciation for Kathleen Hanna and the Riot Grrrl movement.  Always dedicated to growing as an artist, Pandora quickly moved on to start writing plays, including The Gay Anthem (an homage to the LGBTQ community) and FOY (psychological thriller).  With the support of her colleagues in the Passage Play Lab and the Witherspoon Circle, Pandora continues to hone her talents as a playwright.

All this performing made it impossible to continue working at the Maggie Flanigan Studio.  So, in 2014, she left in order to pursue her artistic endeavors.  However, in 2016, she was invited to join the facullty of Terry Knickerbocker Studios and she accepted in order to fully realize her original script analysis methodolgy and to get her textbook on the subject published by a major publishing house.

Currently, Pandora plans to develop one of her writing projects into a sit-com and to find the right producers for her women’s equality solo comedy show SELFISH, so that she can take it on national tour.

Pandora is very proud to share that her baby girl, Z, is thriving as an up-n-coming make up artist in LA, having just graduated from MUD (Make Up Designory).  And she is thrilled to let y’all know that on June 21, 2019, she and her fiance, M, will be getting married.

In her own words:

I believe the world needs as much connection between people as possible. I'm out here to connect with as many outsiders and misfits as I can - and to let them know it's ok to connect with each other. To let them know that it's ok to be everything they are and want to be - in all the complexities and confusions that make life what it is: one big, crazy, beautiful messy love storm. You are Enough.  Power to the Peaceful and Love to All...